Pleats are a horizontal section of fabric at the panel heading that has been folded and sewn in place to create fullness.
Our unique pleated styles will give you the custom drapery look to fit your decor.
Avoid the pared down and plain look of ready-made (bought off-the-shelf) pleated draperies.

Shown below are styles of pleats available on drapery headings created by hand in our workroom.

No buckram or stiffener is used in the heading.

The heading between pleats is tack pleated down, creating a set of horizontal pleats.

The sections of the heading between pleats are cut in a scalloped shape.

A border heading is placed behind the main panel heading and they are pleated together as one piece.

Use decorative trim to highlight the pleat point of the heading.

Flags are integrated into a soft heading between pleats.

A necktie flounce is attached to the main panel at the pleat and it is pleated together as one piece.

A stright border heading is placed behind the main scalloped panel heading. They are pleated together.

A fabric scarf is threaded through buttonholes between the pleats.

The pleat section of the panel is extended and tied close at each pleat.

Contrasting ties are threaded through buttonholes in the panel at the pleat base.

A ruffle is insert in the panel at the pleat base before pleating.

The front of the goblet is split and folded back to expose the contrast lining of the interior.

The throat of the box pleat is folded back and tacked or pressed in place.

The heading has a raised border. The goblet is short and has an open throat. The upper goblet is stuffed.

Buttons embellish the face of the panel at the pleat.

Open tuxedo pleats with contrast lining and interlining are trimmed with buttons.

The box pleat has an integrated flag in the heading that is folded over the top of the panel.

Pleated swags are place between each pleat at the heading.

The box pleat has an integrated scalloped tab in the heading that is folded over the top of the panel.

Pleated swags are placed between each pleat at the heading.

The heading has a double valance pleated together as one piece.

Group pleats together for an interesting heading.

Tripple-point flags are added to the top of the heading before pleating to create gathered fans. 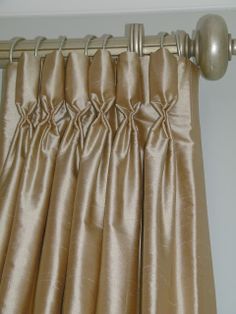 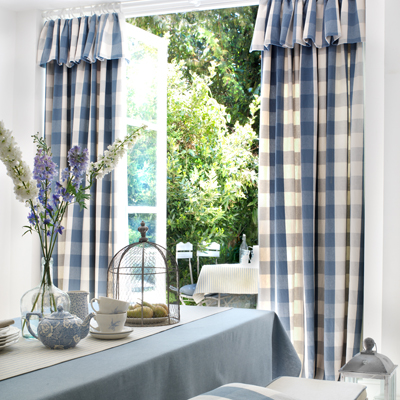 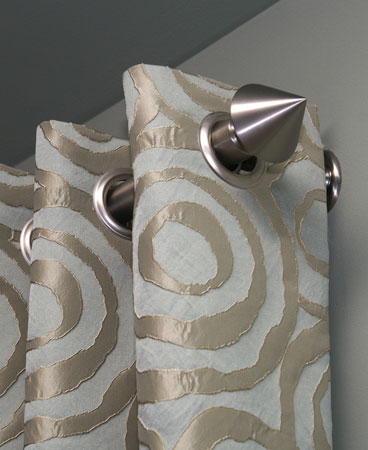